Greetings, fellow underhivers! As many listeners of the podcast will already know, I'm really into Necromunda these days. Haven't played the game much while we wait for more gangs to drop, but I'm starting to get my little section of the hive ready for battle by painting up the walls and scatter terrain from one of the starter boxes I've picked up.

The idea for this project was simple: make some super crusty walls and get some more experience with my weathering pigments along the way. I barely ever use the stuff, but the results speak for themselves. You should really look into using them for terrain if you don't do it already.

Before getting started, I made sure to read up on my techniques. The Forge World Masterclass books are fantastic, and they have tons of step-by-step photos of weathering up all manner of resin vehicles and terrain. Plenty of different techniques and materials are used, and they really hammer home the point that you can experiment and come up with a lot of different ways to apply the paint/pigment to the model, and most of them will work just fine.

Here is a list of colors that I used during this tutorial: 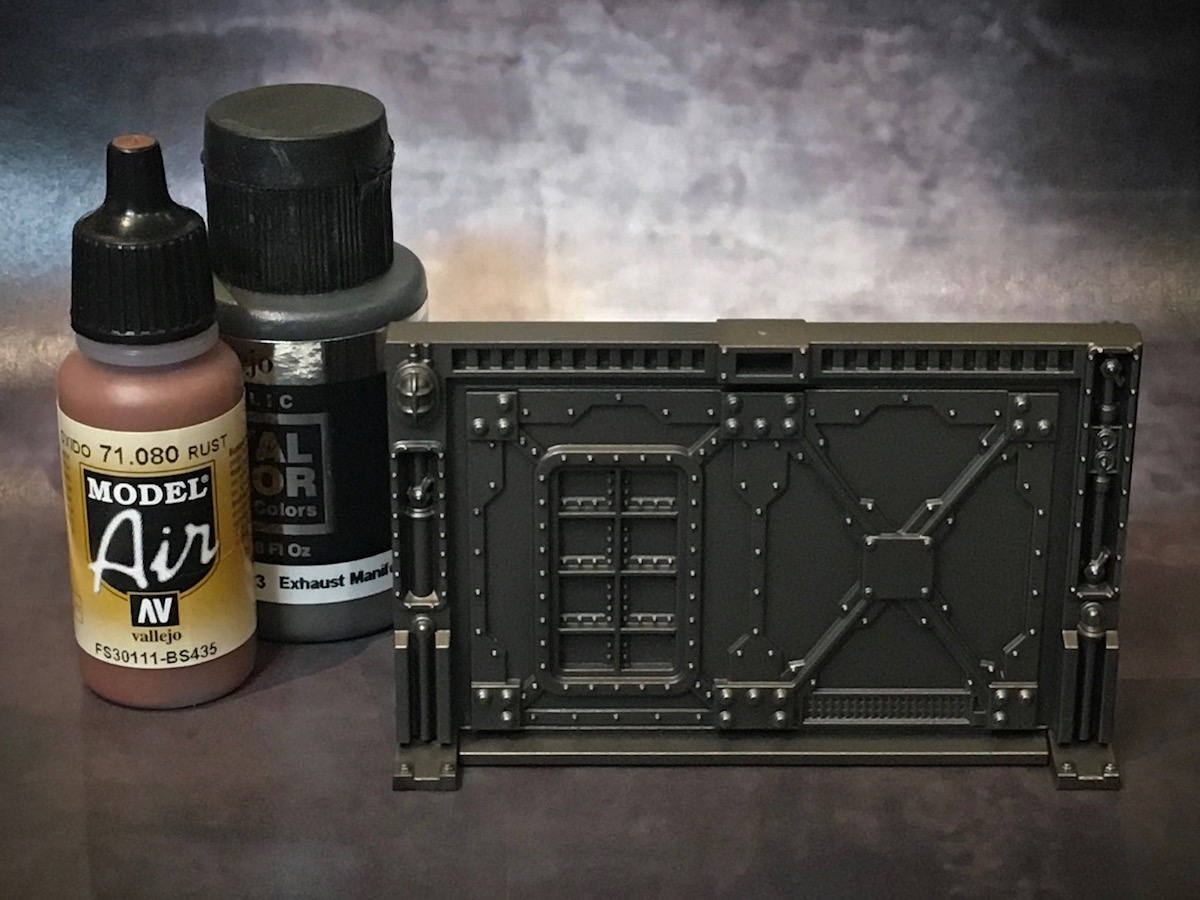 The process started with a base layer of Vallejo Model Air Rust, but honestly the Vallejo Metal Color Exhaust Manifold covers so damn well in one thin coat that you can't really see that it's there. Feel free to drop the rust color, but also note that Exhaust Manifold is quickly becoming one of my favorite paints. It's just a fantastic color -- kinda like Boltgun Metal with a bit of Agrax Earthshade already mixed into it for a hint of brown. 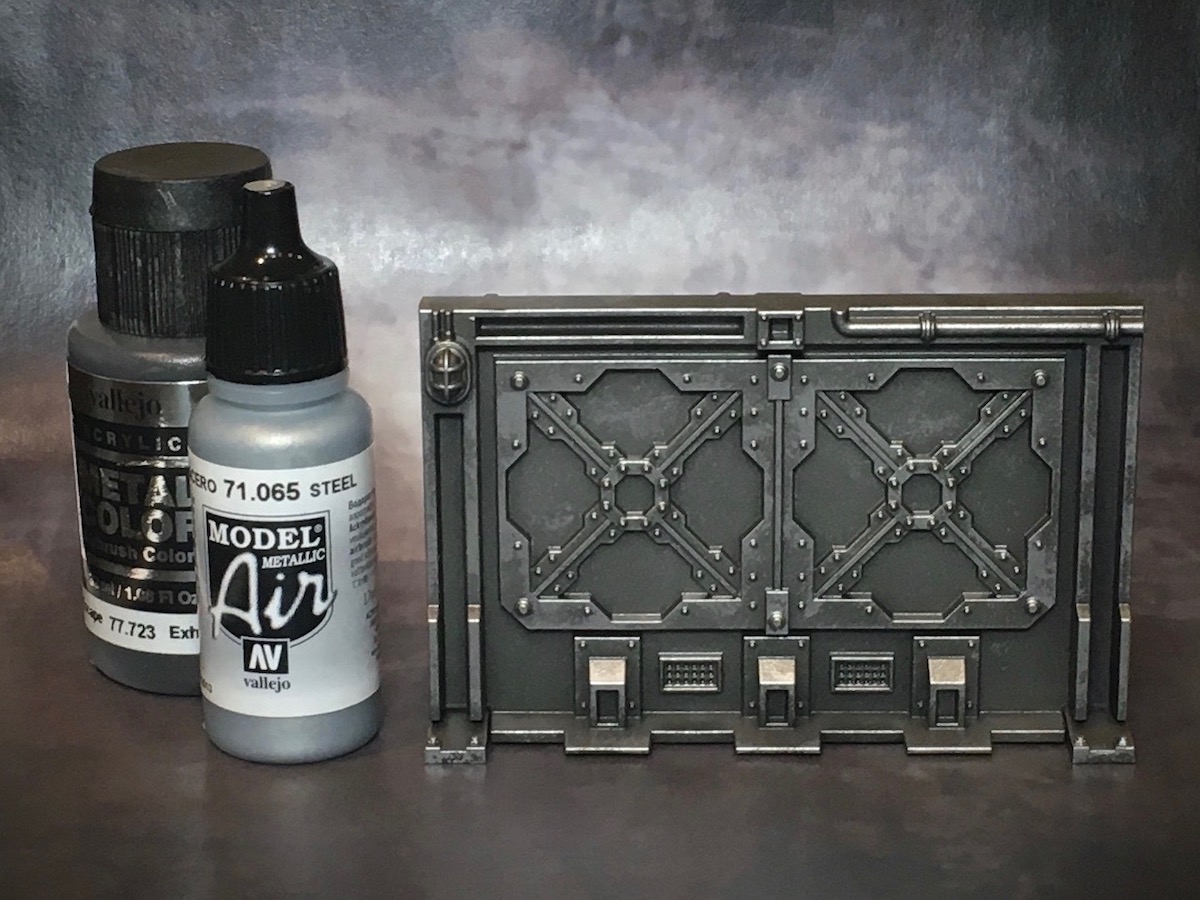 The first next color uses some Model Air Steel mixed into the Exhaust Manifold and sprayed sparingly as a highlight. I then mixed in a little more steel, and sponged it on roughly to add texture. 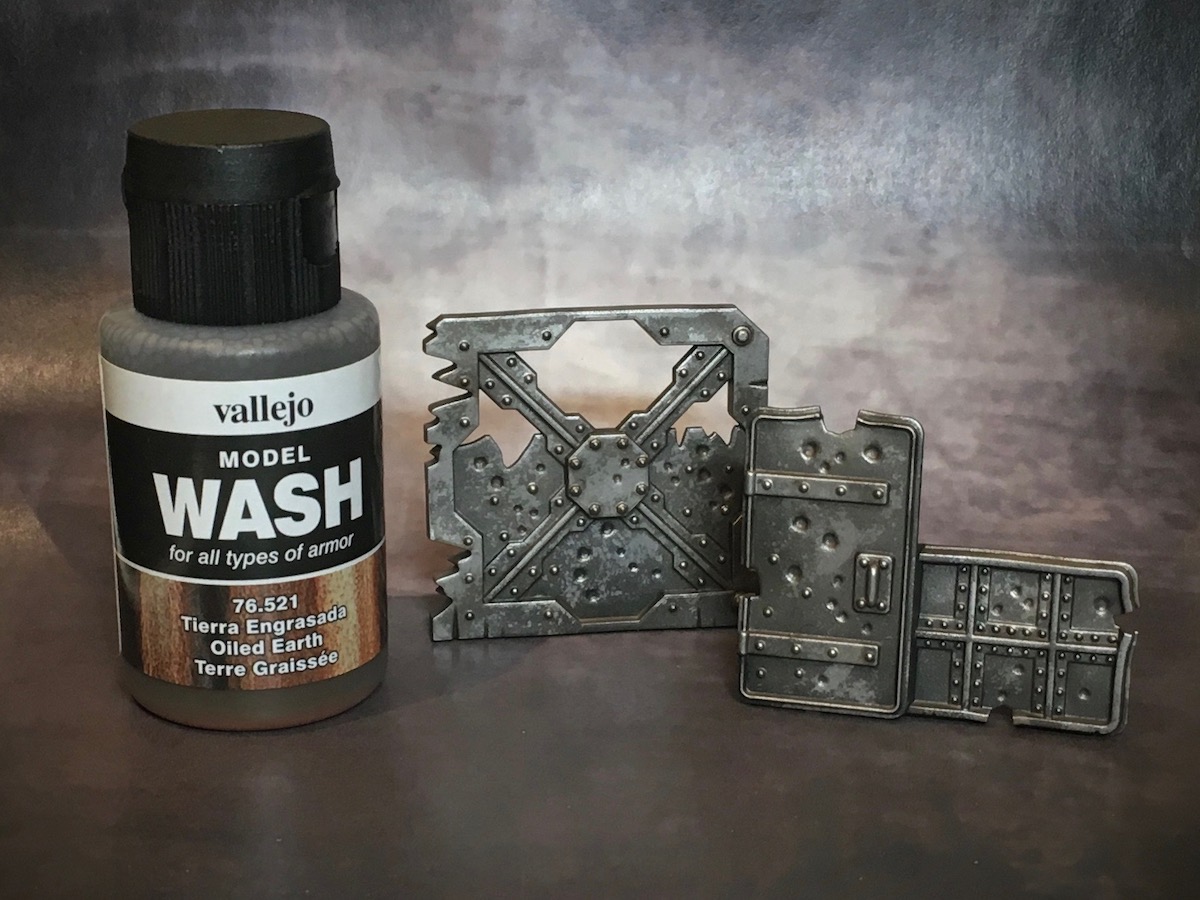 Next up was Vallejo Model Wash Oiled Earth, which I have owned for months but never used until now. The Model Wash line can be airbrushed, and thanks to its slow drying speed it will go on wet and look an awful lot like a brush-applied wash, but in a fraction of the time. This is incredibly handy! It's also water soluble after drying, so you can do some streaking effects or simply remove it if you apply too much.

I used this to enhance the brown tone on any terrain pieces that got hit with too much of the highlight mix, and strayed too far away from the original Exhaust Manifold. Just spray it on, and if you have a dual-action airbrush, you can spray air only to push the wash around the model as needed to nudge it where it needs to go. If any areas need it, feel free to do a second coat when the first one has dried. I added some water and airbrush thinner to the mix, so I had to build up the color intensity with a second coat. 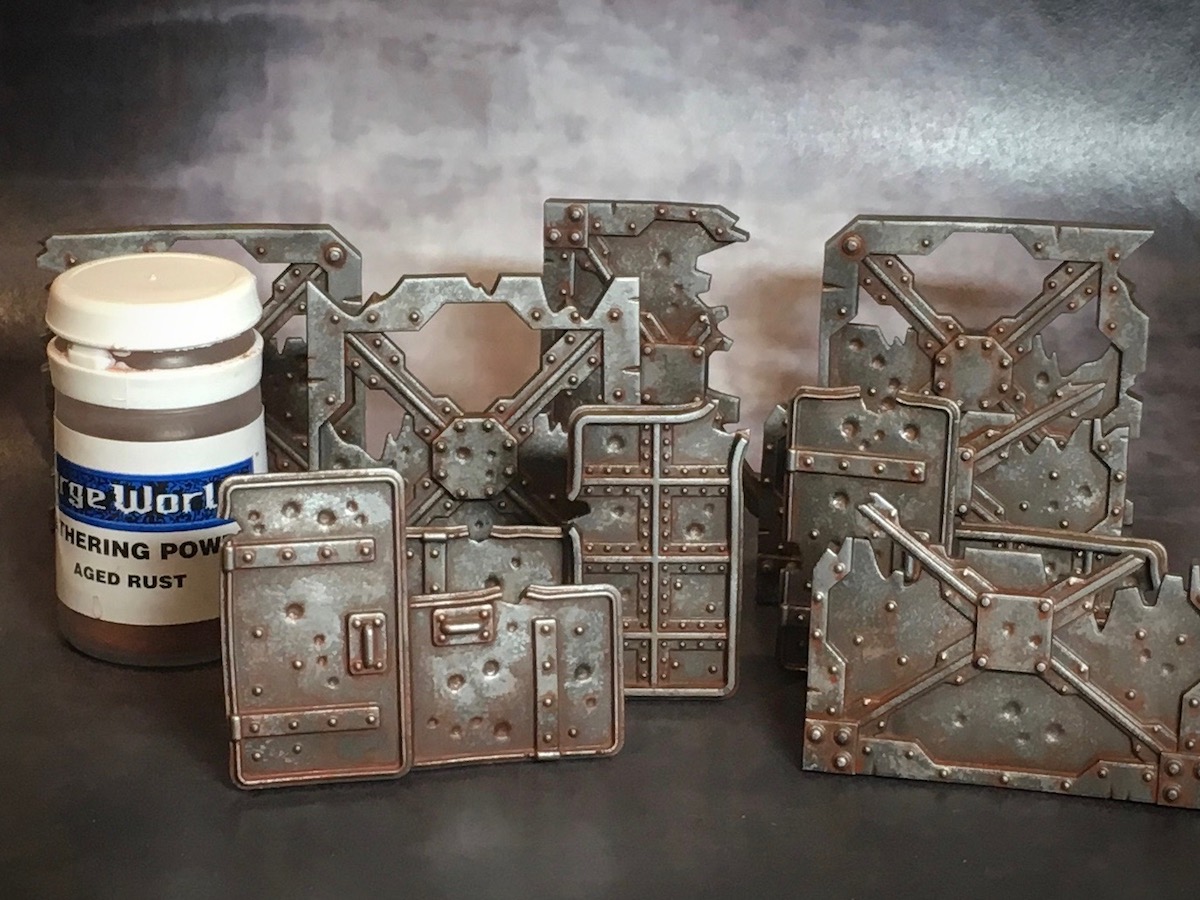 Next up came the weathering pigments. I wanted to try using pigment washes to really show where the rust would accumulate the most over time. I started with Aged Rust from Forge World, which is the darkest rust color they make. (Orange Rust is the midtone and it lives up to the name, while Light Rust would represent the freshest patches of rust and has a brighter yellow tone to it.)

You can use water to make washes, but lots of folks prefer airbrush thinner or isopropyl alcohol instead because it dries a lot faster. If you're using one of these thinners, you probably should use a light coat of satin or gloss varnish on the models to protect the silver paint. I used Munitorum Varnish from GW.

Use a bottle cap or small plastic cup to mix the pigment and your fluid of choice. It should be very watery, but look fairly opaque. Play around with it, and you'll get the feel pretty quick.

Apply this wash mixture to the recesses of the model, the same way you would if you were just using any old wash to add shading. You'll see that the intensity of the color really changes as the wash dries, so you might have to go back and reapply to some areas, or use a clean wet brush to blend in the lines a bit if there's a transition you don't like.

When this has all dried, you can go back with a moistened q-tip (or cotton bud for our colonial masters across the pond) and clean up any areas where the wash went on too heavy. I specifically targeted raised edges, the areas around the bullet holes, and the areas around the rivets to clean them up the most and allow the silver to shine through. By using an up-and-down motion on the q-tip you can get a basic streaking effect and further simulate the action of dripping water in creating this rust. Allowing more rust to remain on the lower half of the terrain allows for a nice transition across each piece.

That's it for the first half of the tutorial! I need to put in a little more work to finish up all the terrain, at which point I'll do the second article (including a highly-experimental technique to using the pigment wash). See you next time, folks.